One night when I was living in Madrid two years ago, I had a terrible fever. I was pacing around our small Piso, speaking incomprehensibly, refusing medicine and a trip to the doctor.

Finally, I let my boyfriend Mando go to the pharmacy for me and while he was gone, I began having crazy thoughts. I had deep feelings that something was wrong, but ignored those feelings and told myself it was my feverish state. When Mando got back he gave me my medicine in hopes to calm me down and checked his email while he let me rest. He didn’t want to bother me but had to let me know that my Mom had written him to have me call her.

Why had she written him and not me?

It seemed odd from the get-go. I called her in my feverish frenzy to find out that my Dad had suffered a heart attack and died.

My Dad and I outside one of his favorite restaurants, Scoma’s in San Francisco.

I was shocked and devastated to hear about my Dad’s death. After I had time to let reality sink in, not that it ever really does, I looked back on his life and how it could’ve happened that he died of a heart attack. And this is when the shock dissipated, because it all made sense really.
When I was little I would call his stomach my ‘pillow’ and rest my head on it while we watched television together. He would drink Sprite out of the liter bottle in the fridge and spent most of his life in the restaurant business, eating whatever deep fried bits he could get his hands on between serving tables.
But neither he, nor anyone in our family for that matter, considered his heavy, round belly, bad eating habits or lack of visits to the doctor’s office an ‘illness’. He hadn’t been diagnosed with anything, after all. But little did we know, an illness was growing in him all along– as I sat next to him at the restaurant table as he spread chunks of butter onto white bread. It was only a matter of time for him, something I would realize only a couple of years after his death. A lesson that would ultimately change my eating habits and lifestyle.
Today, I can’t say that I know entirely what I’m supposed to learn from his death but it gives me comfort believing that there must be something to learn from it. So I try to find the lessons wherever I can. And because so much of my life with him revolved around food, it seemed a great place to start.
~Bad Habits~
When I got the news about my Dad I started drinking a bottle of wine a day–that on top of my other habits; unlimited tapa plates and pretty much whatever else I wanted, because, when in Rome, or Madrid too, it turns out. I don’t regret taking advantage of my time in Europe and experiencing all they have to offer in delicious delights but I regret not acclimating to Spanish eating habits as well as I could’ve. For example, I adopted the late night dinner schedule but my portions were still American-sized. And I never could get used to eating pastries for breakfast so I still made big American breakfasts at home on occasion.
I never considered how eating a smaller breakfast, big lunch and small dinner, like the Spanish do, could benefit the body. I also didn’t consider the source of the products I was getting at chain stores and didn’t utilize the local markets as much as I could’ve. I also binged on way too many European versions of my favorite American treats. Example: I found a bag of Paprika flavored Lays chips that was dangerously delicious. Other mistakes were the snacks I chose and things I ate while traveling because I believed I didn’t have any control over what I ate on planes or buses. I realized later that quick and easy doesn’t have to equal gross and sleazy. Check out my favorite new snacks and swaps for help.
~A Healthy Change~
When I returned to the States after teaching for a couple of years in Spain, I didn’t change right away. It was a process for me and still is. It was very difficult for me to begin this “healthy eating journey” while being thrust back into the American diet. I began by sticking with some of the good habits I adopted in Spain. One of the best eating habits I learned from Spain that I still practice today is a smaller, late night dinner. I don’t buy the American myth that eating late will make you fat. It’s probably bad for digestion, I suppose, but if you’re eating well, you can never go wrong.
Another thing I learned about eating from Spain is sharing. There’s nothing better for sharing than tapas. These small plates ensure small meals and are a great way to get a taste of everything. Mando and I still frequent Spanish restaurants here and share a plethora of tapas together and reminisce about our time in Madrid. I also do tapa dinners at home when I haven’t shopped for a while and am just throwing a few small dishes together.
As I mentioned earlier, Spaniards eating habits have proven keep them quite healthy despite their cigarette smoking. The Spanish also go for after dinner walks and walk more than Americans in general.

A few months after I came back to the States I began thinking about the food I was eating and what it was doing to my body. I wasn’t much for scales but knew that I had gained a significant amount of weight since graduating from college. From there, I slowly began introducing new foods into my diet and excluding others. The first things I added to my diet were vegetables and the first things to be cut were creamy sauces, mayoniase, soda candy and sweets. I currently eat mostly vegan and vegetarian meals because I feel better when I eat this way and it helped me lose the bloated weight I needed to drop. 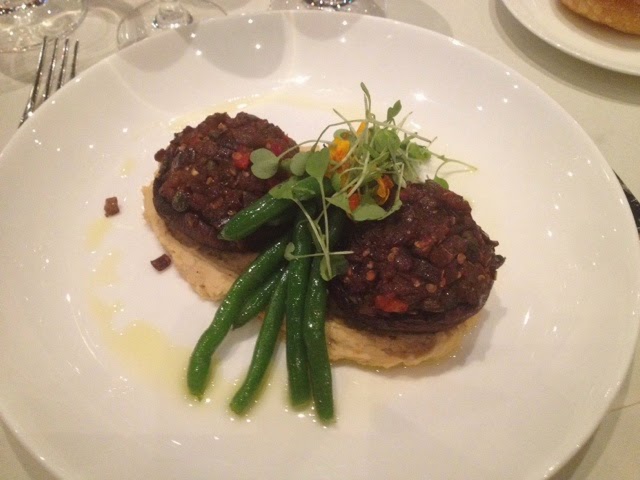 I have, however, eaten my first vegetarian meal at a wedding this May and another on a ferry for a friend’s 30th Birthday bash. And our Fourth of July weekend this year was fully vegan thanks to some delicious recipes, a lot of prep and helpful family and friends. It goes to show you that making these changes can be easier than you’d think and could end up saving your life.

I looooove Sushi! I now try to eat mostly vegetarian or vegan sushi. If I do eat fish, I make sure it’s sustainable.

Today, I love to laugh with family and friends as we tell stories and remember my Dad. How he would stuff himself full of sushi and declare that he was finished just to pick his chopsticks right back up again, minutes later. He was never full. These memories make me happy and make me laugh but I’m not blind to the fact that they are a part of the reason that I can’t make memories with him anymore. Don’t get me wrong– I don’t think too much sushi killed my Dad. But I can’t help but wonder if a different kind of sushi and many other such adjustments in his life would have kept him alive longer.

He also never exercised and was a stressed-out, Type A personality so of course these factors are involved with his death. But I know a different diet would have saved him.

So I take offense when people assume I’m on some fad diet, some version of a quick pill I’ve taken to lose weight. Or that I’m pretentious for suggesting that it’s easy to change your life in such a manner-time-wise, financially, etc. But you choose what’s important to your in life. I have one pair of jeans and five different kinds of vinegars. That’s just me.
A combination of how I use to eat with my Dad along with the knowledge I have now of healthy eating is what works for me. He wouldn’t want me to limit myself, at all, and I don’t. But only with Organic, Non-GMO products, the majority of the time. This is what I’ve learned from my Dad’s death. I would’ve preferred to learn it another way, I think about it so often it hurts. But I learned good habits from his life as well and I get really happy when I think about our best dinners together. The tons of fresh seafood and salads we had. My goal now is to make those same dishes but a much healthier version of them so that I can still enjoy them, by using the best and freshest ingredients and products. Because I would hate to leave the dishes we shared together behind– for their memories and the flavors they inspire.
His memory also reminds me of that it’s OK to eat at BBQ’s, birthday celebrations and on holidays, with ease. I’m not going to dig through the trash to check for organic certification on a food label if you invite me to your house. I also won’t refuse to nibble nuts, fruits and crackers that you put out and may try some cheese, but I’ll politely skip the deli meat slices. Each situation is different for me; whether I eat a few snacks or an entire meal, I do what makes me feel comfortable while respecting my host in the meantime.
So I guess I lied before, not intentionally of course, when I said why I changed my eating habits. I guess deep down it’s those dinners with my Dad that I think back to and the thick, white fat on all those steaks, the house Chardonnay, the ice cream he use to share with his dog Tucker. He would probably laugh at my diet if he were still around now. I probably couldn’t get him to jump on my bandwagon but I sure wish I had the chance to try.
I think maybe he wouldn’t listen to me.
I think maybe I’d slap that tub of ice cream right out of his hands. 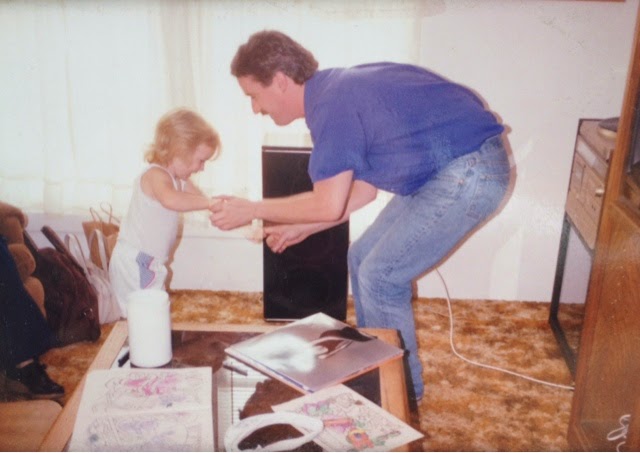 My Dad and I getting our dance on listening to some Whitney Houston.