When organic, local, vegan eats call–I come running. Last Sunday, I attended the Hella Vegan Eats Popup event at Dear Mom in the Mission District of San Francisco. I’ve gotten to know this food truck and its yummy food because they come to my neighborhood Farmers Market. It doesn’t hurt that this Popup event was at another place familiar to me, Dear Mom, a favorite bar of mine and Mando’s among those in the district. We like it for its casual feel and games. We love games.

Rarely do Mando and I have the opportunity to eat organic, local, vegan food while drinking our favorite craft beers and watching an A’s game (it is San Francisco after all). So this temporary, restaurant event was perfect for us. It’s extremely important to support places that serve us dishes using the very best ingredients to encourage their existence in the restaurant and food community.
This particular food event drew us in because we love finding vegan food and because I’m always on the hunt for local, organic food. When I saw on their Instagram page that Hella Vegan Eats would be featuring local, organic produce–I was sold! I fell even more head-over-heels with the idea when I saw what they would be featuring– Tapas vs. Dim Sum at this event.
Having lived in Madrid, Mando and I were excited to see how our favorite Spanish dishes would be “veganized” and the result was pretty wonderful. The paella, which is pretty hard to duplicate, was delicious.

The spice was on par with a lot of Spanish Paella I’ve had. I was pleased about that. There were a variety of well-cooked vegetables including Oyster and Shititake Mushrooms, which were a great, meaty substitute for its unhealthier counterparts usually used in Paella such as Chorizo and chicken. My only gripe is that the rice could have been slightly softer. I loved that it was topped with this giant, grilled avocado and it was portioned very well. I will definitely order it again. 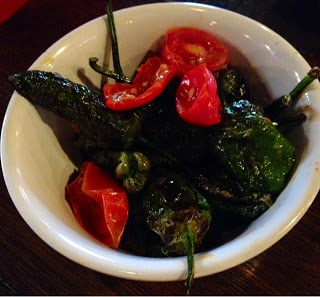 This tiny cup of brought me back to a restaurant in my barrio in Madrid where Mando and I would wipe clean plates of fried peppers doused in chunky sea-salt. Though I don’t remember ever getting so many hot ones in one order. More than one of these peppers set us both aflame!

Their version of Patatas Bravas was my favorite dish. They sliced the potatoes into chunks as well as potato chip like pieces and fried them to perfection. The sauce was a roasted heirloom tomato Aioli and topped with fried parsley and a lemon wedge. I thought their take on the brava sauce was really fresh and I wanted more of. I shared all of these dishes with my boyfriend Mando but I definitely wanted all of these potatoes for myself!

I’m usually not one for desert but I’m a sucker for fried things so we shared a Cherry Bartolillo–cream and cherry filled, deep fried and topped with cherries and a sprig of mint. It was really tasty and not too sweet at all. I love the crunch and the mint really freshened it up.

They also served a Spanish Tortilla made from tofu that came out looking much like the real thing just not as bloated and yellow. But I can’t confirm its taste as I didn’t want to become bloated and yellow. So I decided to end my feast when I felt satisfied.

Hella Vegan Eats will be at Dear Mom again this Sunday, August 31 if you want to pick a side, Tapas or Dim Sum or choose a mix between the both.
If you’re bummed that you can’t make this event (like me, I’ll be out of town), don’t fret, they’ll be in Oakland for the Eat Real Festival September 19 and they are at the Civic Center Farmers Market every Wednesday till 3 and every Thursday Night at the Mission Market till 8. If you’re a fan or you want to be, check out them out for future here for future events.
~Support Organic! It’s out there. Here’s a helpful link for finding Organic near you.